Other years of participation: 1999

From all angles, the AC Ace is a very nice car …
She won the 1958 Macau Grand Prix and belongs to the Secretary of the AC Owners Club.
The model could be delivered, with the choice, with a 6-cylinder Ford (the least powerful), Bristol (the most aristocratic) or … AC. We then had the latest evolution of an engine designed in 1923! 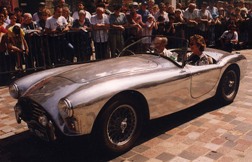 Bodywork of exceptional finesse driven by a powerful (and expensive) engine 2 liters Bristol 130 hp.
Dressed in polished aluminum, this car is simply superb.
The owner Welsh is a regular in Fougères and a rally in the Basque Country which he became “participant of honor”.
We know what we have to do …